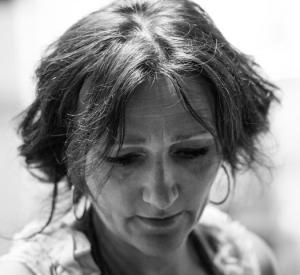 Agnete Brinch is a danish artist. (born 1970)
‘WOMEN WHO CHANGE THE WORLD’, is the first series of more to come, where the mission is to make timeless art about women who changed the world and continue to change the world for this and future generations. Her ambition is to support the fifth of totally seventeen world objectives of the UN; to promote women’s and girls’ universal rights and opportunities.

Agnete Brinch´s motivation is to impart portraits of role models, who in their days against all odds achieved recognition and cleared a path for future generations of women, and to impart the power of the woman, historically and in art history – as a model as well as a role model.

The pieces create a silent scene, which creates a space for refection beyond time and place. Outside the frame exists infinity – inside the frame there is tranquility in which the women step forward on the scene. A space is created – an emotional fracture in time. The eye is led to rest on and reflect upon the historical and still current role models.

Katharina von Bora is such a role model. After her escape from the cramped world of the monastery, she was honored as the world’s first wife of a pastor when she married Martin Luther, little over 500 years ago. She impresses us amongst countless others and is celebrated in the present with an annual prize ceremony directed towards women who have made a difference.

Anna Ancher and Marie Krøyer are two painters which Agnete Brinch, amongst other artists, can reflect herself in. They broke with the norms of their time – Anna Ancher continued to execute her art after her marriage and Marie Krøyer took the initiative to found ‘The Little School’, which became a predecessor for 'The Art School for Women’ which again later became a department at the Art Academy.

Karen Blixen and Virginia Woolf are both writers and examples of women who wrote under male pseudonyms or merely initials. In the case of Virginia Woolf the name ’E. V. Odle’ was a neutral name which aided her in achieving an income in a world dominated by men. Karen Blixen confronted the gender conventions of her time by writing about topics women previously had not written about.

These are just some of the many women who have shown courage and strength. Their energy has embedded itself deep in Agnete Brinch´s view of life and it has been and remains to be a great source of inspiration.

Agnete Brinch´s upcoming project, is a new book coming out - WOMEN WHO CHANGE THE WORLD.

The artist lives and work, at the west-coast of Denmark.

The words of the artist:
"Historical women – depicted women, famous authors, artists and religious personalities – all these enrich our world.
I am inspired by them and fall in love with them – I depict them and they live on through me and everybody allowing themselves to be inspired and fall in love!”
Agnete Brinch 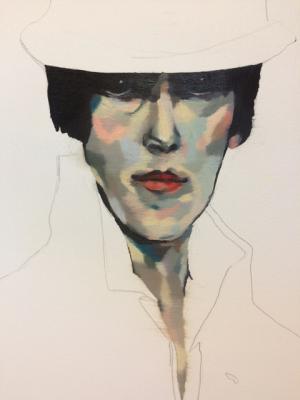 Mette Kristensen, Cand. mag. Arthistory
I have had the pleasure of working together with Agnete Brinch in connection with a stay in Kunsthal vARTe (Art Hall vARTe), and here it became clear to me that she is a very industrious artist, who has a serious approach to her craft.
It was also in this connection that it dawned upon me, that this is an artist, who certainly is moving up in the ranking in the art world.

Agnete Brinch is an artist who is inspired by history and some of the major artists. Several of her pieces take off from the history of art, referencing among others Johannes Vermeer and Vilhelm Hammershoi.
The intent is not to imitate or copy, but on the contrary, to present a new interpretation and a homage to the artists, who originally painted these portraits – and not least to the women portrayed.

It takes courage to take on such masterpieces from the history of art, pieces that most people are well acquainted with, but Agnete Brinch gets away with it.
The explanation is probably that they are not merely reinterpretations but an entirely new narration with a contemporary relevance, which might be able to make an impact on yet another generation.

From time to time masterpieces from the history of art need to be drawn into the light of the present, so that we also today are reminded of their continuing relevance, can learn from them, be captivated and wonder. The art is at its present position, exactly due to the historical context and because of this, is this connection not only exciting – it is also relevant.

The depicted women are often personalities that have attracted attention, or who even have made a difference. It can be in the arts or in society in general.
The artist chooses what we are allowed to see and how much. Sometimes croppings have been made, allowing us only to see parts of the face, which helps in arousing our curiosity.
Here the artist leaves it to the spectator to form the images in the hidden areas. Through this, the pieces appear open and are left to the spectators’ own interpretations.

In other portraits, we are allowed to see the entire face and are rewarded with an intense and persistent gaze. The women stare directly upon us and our eyes meet. One can get the idea whether it is we, as spectators, that are looking at the painting or the portrayed that is looking at us…
Transcending the paintings is the fact that a unique calm and harmony always rules and no matter how much or little we are allowed to see, then she manages to resurrect the portrayed women – once again – through her strokes with the brush.

I have followed the work of Agnete Brinch through a couple of years and her portraits seem to become more intense and mysterious. The faces, comprised of these colored fields, add the motif a kind of depth and movement. The spectator is hit. You get a desire to know more. More about the portrayed women and more about the artist.

Jørgen Steinicke, Cand. mag. Arthistory
Agnete Brinch is an artist who is moving forward swiftly. In 2015, she has experienced several successes. Among others, she has participated in the distinguished “Portrait Now” on Frederiksborg Castle and several large galleries have spotted her. That is understandable. Through her processing of amongst others the works of Édouard Manet and Vilhelm Hammershoi, she fully acknowledges the tradition of the history of art. Simultaneously she presents herself as a completely contemporary artist through her almost abstract interpretations.  It is exactly because of this, that her portraits become so interesting. They are both surprising, exciting and sometimes humoristic.